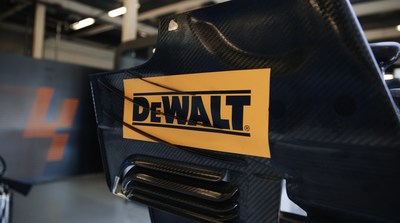 The McLaren and Stanley Black & Decker relationship combines two leading brands who share a dedication to innovation and technological advancement in their purpose.

As the team's Official Tools and Storage Partner, DEWALT, a Stanley Black & Decker brand, will be visible on the rear wing endplates of the McLaren MCL35M race cars and the racesuits of McLaren F1 drivers, Lando Norris and Daniel Ricciardo.

"Stanley Black & Decker is renowned for excellence and providing their customers with products to achieve great things. We are delighted to welcome another global brand in DEWALT to our family of partners and look forward to working together to bring our relationship to life through the global stage of Formula 1."

"We are excited to partner with McLaren Racing, a brand that is best-in-class in innovation and drives its purpose on and off the racetrack. At Stanley Black & Decker, we share the same values - innovation and excellence have powered our success and we live our purpose each day, 'For Those Who Make The World.' Our partnership will help us engage with the world's most passionate motorsports fans, celebrate the makers who help build the world and bring our admired DEWALT brand to the international racetrack with world-renowned drivers, Lando and Daniel."

About McLaren Racing
McLaren Racing was founded by New Zealand racing driver Bruce McLaren in 1963. The team entered its first Formula 1 race in 1966, since then McLaren has won 20 Formula 1 world championships, more than 180 Formula 1 grands prix, the Le Mans 24 Hours at its first attempt and the Indianapolis 500 three times. McLaren Racing currently competes in Formula 1 globally and INDYCAR in the US.

The team is contesting the 2021 FIA Formula 1 World Championship with Lando Norris and Daniel Ricciardo, and in the 2021 INDYCAR Series with Arrow McLaren SP drivers Pato O'Ward and Felix Rosenqvist. In 2022, McLaren Racing will enter a new category of motorsport when it enters a team into Extreme E, the innovative all-electric off-road racing series.

About DEWALT®
DEWALT is obsessed with how users work in the real world and is relentlessly pursuing total jobsite solutions. By incorporating its latest technology and industry innovations, DEWALT is leading the charge for the jobsite of the future. DEWALT products. GUARANTEED TOUGH®. For more information, visit  www.dewalt.com  or follow DEWALT on  Facebook ,  Twitter ,  Instagram , and  LinkedIn .

About Stanley Black & Decker
Stanley Black & Decker (NYSE: SWK), an S&P 500 company, is a leading $14.5 billion global diversified industrial with 53,000 employees in more than 60 countries who make the tools, products and solutions to deliver on its Purpose, For Those Who Make The World. The Company operates the world's largest tools and storage business featuring iconic brands such as DEWALT, STANLEY, BLACK+DECKER and CRAFTSMAN; the world's second largest commercial electronic security company; and is a global industrial leader of highly engineered solutions within its engineered fastening and infrastructure businesses. Learn more at www.stanleyblackanddecker.com.